I’ve spent most of my adult life working in retail, most of that time in management. It’s not a career I would recommend to anyone but if you like talking to the general public and having a career where no two days are alike, usually busy and at times you feel like a plate juggler with sixteen plats spinning and half of them wobbling, then it’s the right career for you.

I bring that up because over the course of working in retail I attended a lot of training seminars on selling techniques, motivation, leadership and even something called training the trainer. The last was intended, of course, to train me to return to my store and train everyone else. A recurring theme in all of the training I received was How to Succeed. Isn’t that really what we would all like to know? What’s the secret? What are the keys? Is success a strategic decision or does it happen as a random chance accident.

One of the greatest lessons I picked up from all those training seminars is that success is not a destination but a process. One of the most common mistakes people make in their quest for success is seeing it as a goal. You have only to look at successful people to determine that one of the reasons they succeed is they refuse to fail. Sounds silly, I know, but it’s true. They learn from their mistakes, make adjustments, start over again, keep working at it until they achieve the intended results. But once they arrive a some point that from the outside perspective may appear to be success, they seem completely oblivious to the fact that they might have succeeded. Why? Bbecause they are still engaged in the process of success. They have a longer range plan perhaps or their goals are constantly in flux. But they never seem to arrive at a point of satisfaction with what they have accomplished.

The adage about if at first you don’t succeed is kind of misleading, though. Trying is part of the problem in failure. “As long as you tried your best” will often result in lowered expectations. You become content with the attempt and not the outcome. “I tried” cannot be a satisfactory answer. To only ever try is to only ever fail to succeed. It’s easily proven. Drop something on the floor and try to pick it up. If you actually try you can’t possibly pick it up because that would not accomplish what you stated was your goal. If you pick the object up you have succeeded in not trying but instead doing.

With all that in mind, failure, then, is an opportunity to learn more about the process of succeeding. I had a boss when I worked for a major retailer. His motto was if you don’t fail you’re not trying hard enough. The company was extremely successful because it allowed its employees to have an entrepreneurial spirit. For managers it was really kind of like having your own company and using someone else’s bankroll. We were encouraged to think for ourselves and do what’s right for the customer without needing anyone’s approval. As front line employees, the ones who actually interact with he customers where all the revenue for the company is really generated, we were given the authority to be the hero and make the customer happy. This led to some exciting times during the a period of rapid growth and expansion for the company. It was kind of a perfect storm situation, a confluence of doing enough things right that even when we made mistakes it didn’t matter much because everything else covered for it. Sometimes we did really crazy things and because we believed we were going to succeed we made the impossible or unlikely happen. Not only did we think outside the box but also we were constantly working outside of the box.

Here’s an example of one of the craziest things I ever did . With every opportunity to fail instead I succeeded: 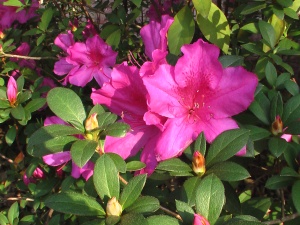 I ordered 12,000 – 1 gallon azaleas to be delivered the day an ad broke on the third week of February in Florida. They were in bloom. It was the right time of the year to make customer start thinking about springtime in Florida. I had one week to sell them. Did I do it? Well, no. But the only reason I didn’t sell 12,000 was that the vendor could only fit 11,500 on the truck. No one in his or her right mind would order that many live plants with the risk of them dying and suffering a sizable markdown to zero. But who said I was ever in my right mind?

I didn’t ask anyone’s permission to do it. I had a open checkbook when it came to ordering whatever I intended to sell. To everyone else who looked at it from the outside, including my district manager who showed up the day I was unloading the truck, it was a career decision. Yes, he told me if I didn’t sell all of them I was fired. Frankly, I didn’t believe him because firing someone who was crazy enough to work for that company at the time didn’t make a lot of sense. Going to work each day was a lot like jumping onto a train that was whizzing by at 90 miles per hour. It took a special breed of lunatic just to survive. Still, I took the ‘threat’ as a challenge and motivation to move a whole lot of azaleas in a short amount of time. I was not about to fail so making it happen was all I could do.

Certainly it was a gamble. But to me and the people who worked for me it became a fun adventure. Let’s see how many azaleas we can sell! Keep track of your sales, print out a duplicate receipt from the register every time you take a customer up to check out with azaleas. But the contest was not based on how many plants were sold but instead everything else on the ticket. To make it fair to everyone there was a prize for the most dollars total over the sale period and another price for the largest single sales ticket. It was a easy enough award. Each winner got a day off with pay.

Now we did a lot of other things too, like I had one of the employees out at the street with some azaleas and a sandwich board sign promoting the sale. I called local landscapers to let them know about the great deal we had going on. We were not going to mark down a single distressed plant. We were determined to sell everything we brought in.

How can a company make money doing that? Well it can’t if that is all you sell. But I considered that an investment, like advertising. It was a promotional expense in order to call attention to all the other great deals we had on things that we actually made a little money on. We were promoting everything on sale in our catalog paying particular attention to everything featured that applied to azaleas because they were in season and in demand. We made it a circus-like experience for customers. You didn’t have to ask if the plants were on sale. You didn’t even have to ask were the plans were because when you have 11,500 azaleas you merchandise them everywhere!

Making a sale into a true event, generating a lot of talk in the local community, we planned to succeed. And if you think people weren’t going home and calling their other plant-loving friends you’re wrong. We also had customer asking if they could use out store phone tell their friends. (This was before cell phones were ubiquitous).

How we made money was that while the customers were buying five or ten azaleas they were also buying the soil amendments like peat moss, fertilizer, shovels, landscaping fabric, edging and decorative mulch. A few decided to buy a new lawnmower, string trimmer or hedge trimmer. We sold a lot of grass sheers, gardening gloves and garden hoses as well.

As a result of ordering a truckload of 1 gallon azaleas between Thursday when the ad broke and the end of the sale, which was the following Wednesday, the garden department in my store was the top department in the entire chain with sales of $127,000 in February! The promotion has a residual effect as well. The following week sales comped (meaning comparative sales from one year to the next) 15%. The largest ticket sold during the contest period was $1,213. The largest total sales by employee was $23,455.

A week after the event my buyer from corporate office flew in just to take me to lunch. He decided he wanted to shake the hand of anyone who did something that crazy and made it happen. I finagled free lunches for both of the employees who won the sales contest and my department lead as well. Since it was kind of her idea to order a lot of azaleas in the first place it only seemed right, though her original order had one less significant digit to the left of the decimal point from the one I actually signed.