Fourteen years ago, around this time of year, was my father’s funeral. He lived to be almost eight-six. He always said he wouldn’t live too long past the turn of the century and that turned out to be the case. the last few years of his life he was in and out of hospitals it seemed. He had Parkinson’s and so he had difficulty swallowing properly. As a result, he was prone to aspiration pneumonia. I know he’d say he lived a pretty good life even to his final days.

He was born one hundred years tomorrow in eastern Kentucky near the town of West Liberty. His childhood was largely about work and helping support the family. It was a hard life but also a honest one.

Dad did not have a high school education. He finished the ninth grade. He came of age in the midst of The Great Depression and served in the Civilian Conservation Corps (CCC) helping build the infrastructure of highways, parks and dams that modernized Appalachia. In 1935 he married my mother. He went away to Ohio to work on a farm and saved money to bring my mother to Ohio to live.

The following May my brother Baris was born. My parents lived in a chicken coop at the time. Mom chucked rags into the cracks between the clapboard siding to keep the cold out in winter. Even so, it was always drafty.

Baris died a little more than a month before his ninth birthday. He had suffered in the aftermath of a fall earlier in his life when he struck his head and was prone to seizures. 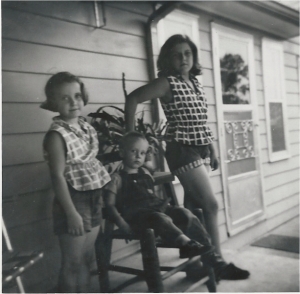 My sisters were born in 1947 and 1952. I came along in 1956. Seeing that us children had the best possible education was their priority. Dad wanted us to at least have the opportunities he and Mom never had: to graduate from high school. But his goal was for all of us to receive college degrees. His other goals were to own his own farm and his own house.

By the time I was born Mom and Dad had saved enough to buy land and build a house near the village of Selma, Ohio, a few miles west of the town of South Charleston. That was where I spent most of the first ten years of my life.

In 1965 my oldest ester, Joyce, became the first of us to finish high school. Later that year Dad realized another of his personal goals, buying a farm. A year later he build a new house on the farm and we moved into it.

Joyce married soon after high school and her son, Jay, Dad’s first grandson, was born in 1966. My sister Genette became the first of the family to graduate from college in 1974, the same year I became the third to graduate from high school and begin college. Genette continued her education while serving as an officer int he USAF. I would receive my first degree in 1978 and my second in 1981. Later on I received another degree while in the Air Force.

In 1985 I was married and a year later my son, my dad’s second grandson, was born. A couple of years the first of my two daughters, Dad’s granddaughters, was born.

In retirement Dad and Mom sold their farm in Ohio in 1978 and moved first to south Texas and later to the west coast of Florida. My parents lived out the last days of their lives in Palm Harbor and were interred in nearby Dunedin.

There is so much more to tell about how my dad lived and what he stood for but I think it is best to leave that for another time and perhaps in another way. Suffice it to say he was a good, hard working, decent and God fearing man who loved his wife and his children and did everything he could to help other people. I never met anyone who didn’t like my dad. He overcame a lot to achieve what he did in life. I believe everyone who knew him misses him. 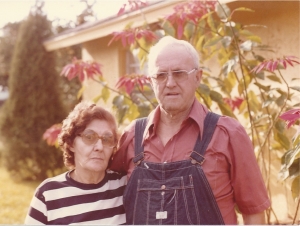