Today and yesterday were kind of dedicated promotional days. That’s why I didn’t post anything. Sort of busy answering questions and making pitches for Fried Windows, Becoming Thuperman and The Wolfcat Chronicles.

Speaking of the wolfcats, I’m working on Chapter 9, but I’m about 3/4 of the way through a new chapter that I’m writing. It helps tie into the rewrite and also connect the series into Fried Windows a little better than the original version.  Otherwise I’m hanging out with my son’s dog, my grand-dog, as it were. His name is Rocco. I’ve mentioned him before. He’s 105 lbs of American Bulldog and a big baby. He’s sitting beside me as I write this, wondering why I haven’t petted him in the past ten seconds and hoping I’ll take him on a walk so because usually he gets a treat afterwards. 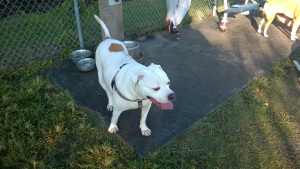 I read somewhere that most days read the mental maturity of a two or three year old. Rocco is definitely in his terrible twos. He demands attention almost constantly but he does understand a few simple words and phrases. However, he doesn’t like deviating from routine. Like going for a walk. The county has decided to tear up some of the sidewalks,It seems related to whether there is a pin oak tree near to the section. This has interrupted Rocco’s usual path for walking so it confuses and frustrate him when I make him detour around the missing sections or the freshly poured concrete. The county frowns upon dog prints in the fresh new slabs. Apparently they consider that graffiti for which there is some sort of fine if they catch you. Is anyone else getting a mental picture of the local sheriff running through  set of paw prints belonging to known offenders?

Anyway, the promotional stuff went well. I don’t know if I sold any books but I made some friends. Friend may last longer than book promotions, anyway.

I believe I’m still on target to complete Book 10 of The Wolfcat Chronicles before the end of the month. I don’t force any problems yet. The new stuff I’m adding in gives the series a twist or two, and lends a touch of mystery to the last book the series. It’s all good. 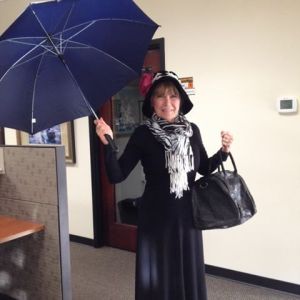 In other news, today is my big sister Joyce’s birthday. In the pictures above she is dressed for Halloween. So, no she doesn’t always dress funny. Anyway, Joyce is nine years my senior and was known to babysit for me when I was like Rocco is now – no, not a dog but a whining pup of sorts and totally dependent. She’s one of those special people you enjoy being around because she savors friendships and loves life. When I’m around her I have to step up my game a bit to say something funny or unusual. She has that effect on me. I try to make her laugh. I always have. And if she doesn’t laugh with me, I’ll accept her laughing at me. 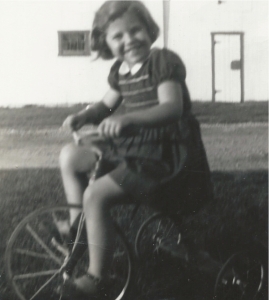 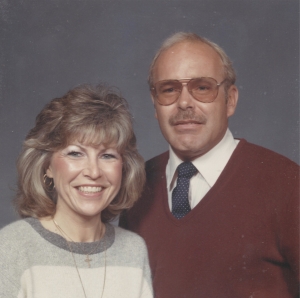 Today would have been my brother Baris’ seventy-eighth birthday. Although I never met him in life, his ghost haunted my childhood, figuratively speaking – same as with my two older sisters.

The simple truth is that had he lived, maybe one, two or all three of us other kids would have never been born. You see, each of us was our parents’ attempt to replace him.

Baris’ life was difficult from the outset. My parents were dirt poor, staring out their marriage living in a chicken coop on a farm where my dad was a hired hand. As a child he suffered a head injury when he fell. Never fully recovering from that he suffered periodic seizures until his death in the spring of 1945. 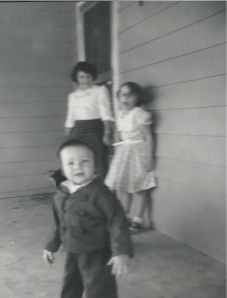 I say that my sisters and I might not be here had he lived out of a general sense that our parents might have been content to have only he one child, a boy. Certainly their world would have been different. The reasons for trying to have other children would have been removed. Mom might not have wanted to go through childbirth again. Even if she did, my oldest sister may have been the old other child. She might have gone for a third child as well, but I really and rule doubt I’d be around because Mom was pouching forty by then and even when she consulted her doctor about the possibility of having me he advised her against it.

Growing up, there were pictures of Baris in our home in photo albums and one adorning the wall, as one might expect. There was his favorite jacket that I wore sometimes as it became mine as well. But moreover my mother told me I was his replacement, the answer to her prayers of twenty years. When I think back about the times my mom said things like that to me I realize that was a pretty heavy burden to lay on a little kid. I can understand it, why I was always compared to him in her mind, but it did not make it right.

A parents aren’t intended to outlive their children let alone lose one so early in a marriage as my parents did. It sterns a relationship, to be sure, and it is something that remains int he background throughout the remainder of a couples individual lives as well as their marriage. No one who hasn’t experienced it can really understand or truly comment on it. My understanding comes from seeing the after effects that lingered into my life and shaped my childhood.

Instead of being myself as a child I felt compelled to be whatever Baris might have been. As I grew beyond the nearly nine years of age that Baris had reached prior to his death, I developed my own goals and direction – essentially outgrowing the ghost of my early years. So maybe, overall the point is moot whether my life might have had different potentials had he lived. But it is something I still think about every year as my own birthday approaches. A sobering thought or two about what might have been had my brother survived. He would have been a young man by the time I was born, an older brother who might have seemed more like an uncle, taking me places and showing me things he’d learned while growing up.