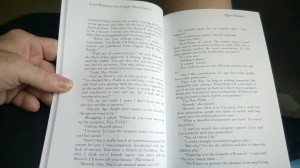 There’s a manuscript I wrote a long time ago that starts out in the middle of the story. In fact the first paragraph is about why it makes as much sense to start telling a story in the middle as it is at either the beginning or the ending. I never submitted that manuscript for publication because it just never felt quite ready to go through that level of scrutiny. As I recall the story was mainly about living and though it had its moments of excitement and resolution it seemed to begin in the middle and after several hundred pages it was still in the middle. But, because of the experience of writing it I have always thought about the concept of starting out in the middle as a commentary on real life.

You know, of course, that we all start out in the middle of something else that is going on around us. For years we play catch-up, learning and absorbing from parents and other, more experienced, family members. Then, as we mature we have teachers, clergy and bosses – pretty much everyone we meet is in influence for whatever span that is determined as appropriate for being a human sponge. At some point, though, someone decides we have become competent. Perhaps it is a degree conferred or some other credential we earn. Maybe it is simply that we have mastered doing something and others decide we are suddenly expert. Whatever and however it happens we are an adult at that point. Maybe some of never reach that point. Who knows?

My thought here is that the beginning of each of our lives is an illusion as much as the endings arbitrarily attached to death. Between times we are immersed in the world and life is a matter of sinking and drowning or swimming and surviving. Living is all about being caught up in the experience. I believe that if a writer is to imitate life, he or she needs to understand being the midst of things. For a reader being in a book world should be similar enough to real life that disbelief is suspended as the author introduces a new, surrogate world. Mainly I deal with fantasy worlds but I think it applies to all fiction.

A writer must engage the reader instantly because entering a book’s contrived universe can and perhaps should be like being born. Spend the first few chapters staking out the territory and meeting the important people who will help or hinder the experience of living. Somewhere in that process you’ll learn about the conflicts from what the characters say or how they interact. Either way, as a reader, you’ll know early on where the story is headed but probably not where it is going.

A well written book always leaves the reader wondering what will happen next because, as with real life, it is filled with challenge and mystery. There are surprises that are both good and bad. There are horrendous failures to overcome and transcending experiences of joy and ecstasy. Some other characters prove necessary or even vital to the hero or heroine in their lives. Extreme difficulty and immense pressure await and a lot of dull detail can be skipped over or summarized because those are the parts of life that are mostly tedious and routine.

At the climax something important is learned. One climax may lead to another and another, or simply a single culmination may be enough to complete the story that you began telling on page one – which was picked up, of course, in the middle of the character’s life. In conclusion, with the major difficulty resolved, doesn’t that character’s life goes on sen though the voyeurs are gone? We as readers assume that it does even if all that is said about the future has a lot to do with magic, myth and happily ever after. As authors we may decide a sequel is in order but just as likely we may never get around to writing it.

Maybe the reason I write serials is because I start in the middle more often that I begin at either end. The universe inside of me that I share in my writing is as real to me as the outside one that the rest of humanity shares with me. Its as hard for me to walk away from my characters after typing The End as it is to simply pick up and move somewhere else in town or across the country. Maybe that’s how it needs to be for characters to exist in the minds of my readers as well.