No, this is not about golf. I’m not a golfer. If you’re looking for golf stories…Well, I have one, but it isn’t really about do overs.

Back when I lived in Connecticut I took my now ex-wife and kids to the Milford Amusement Center’s Putt-Putt course. While there I observed a highly unprofessional display from what I assumed to be a manager. Publicly (at least it was in front of my family) he verbally chastised the course’s attendant to the point that I felt bad for him. Not sure what he did, but it couldn’t have been something bad enough for that level of lambasting and ridicule. Afterward, it bothered me. I thought about it on the drive home to Wallingford.

The next day was a rare day off. I called one of my friends who played golf and, knowing that he had just bought a new set of clubs and was trying to sell his old ones to make peace with his wife, I asked if I could borrow the old set for the day.

“No, no, I just need them as a prop for something I want to do. I guarantee I won’t harm them.”

With his approval I stopped by his house and picked them up. He asked me to do him a favor and them until he sold them. I didn’t realize how much trouble he was in at home, but the new golf clubs he bought were very expensive. And buying them didn’t go over well since the money he used was being saved for a vacation cruise.

Anyway, I drove to Milford, parking close to the Putt-Putt course, and with golf bag hanging form my shoulder, I walked over to the attendant, the same one who had been verbally ridiculed the day before, and asked him for a caddy. From the priceless, speechless look on his face I’m pretty sure he remembers me to this day.

So, my point is: I know as much about golf as the next pedestrian, but at least I understand what a mulligan is, especially when it is used figuratively for a do-over in life. And today being National Mulligan Day, I spent some time reflecting on what I might change if I could turn back time.

We all think about having a reset, don’t we? I know I have…many times. As a writer of fantasy and sci-fi, my characters wind up in some bizarre situations. I deal with time and event sequences a lot. There is a logical flow. This always precedes that, except for leaps in time. Even then, there are some rules. But whenever I look back on my life and try to find a place where I might want to start over, it’s hard to say which decision, if changed, would create a more favorable outcome further downstream. Would I be better off had things been different? In retrospect, I’ve decided that things just seem to fit where it was necessary, even the mistakes. I learned from some. Others, not so much. But always, I adapted and moved on. That’s life in the real world. 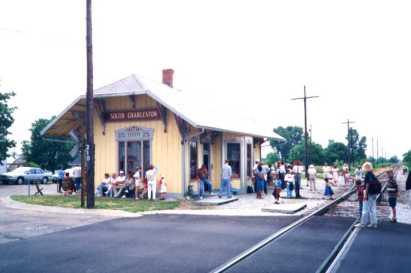 That’s not to say that if I could play it again I wouldn’t change anything, though. It might be more like revising a book, though – little things here and there or maybe one major thing that would only change a brief period. For example, I might sit out for a year or two before going off to college. But if I did that, I might never have left home at all. I probably would have attended a college closer to home. My application was accepted at Wittenberg, after all. But on balance, I think going away from home was necessary, even if it was only a couple of hours’drive. Also, I’m sure that had I stayed home I would have married earlier and perhaps stayed around South Charleston or Springfield, perhaps taking over my father’s farm. In fact, if I knew then what I know now, about someone I liked a lot who was in the class behind mine in school, that would have certainly happened. She liked me, but because I never suspected and was too shy to ask, she became the one who got away.

Maybe she was better off for it. Perhaps I missed out on happiness, but what I do know is that I was spared the further misery of suffering with my many allergies that rural life exacerbated.

As a teen, getting away from where I grew up, two miles from nowhere, was a major goal. One of the reasons I joined a garage rock band was to live the Rock’n’Roll dream of being rich and famous and living anywhere I wanted to live. But after all the practice and the attempts to gain a following, we were destined to remain obscure. Or as Dave, my lead guitarist, said to me when the group broke up, we skyrocketed into oblivion. By then I was already in college and being the long-distance band member, trying to make it home for gigs, wasn’t working out well for anyone. Still, I wonder, what if I’d stayed home for an additional year, played more gigs and gave music more of a chance?

My parents offered me the ticket to escape and I took it. My dad wanted me to study engineering or computer science. Had I done either of those things in the 70’s, what a difference my life might have been. I could have ridden the wave of the computer revolution. As it turned out I did that in a way, though I not as an innovator. Instead of pursuing science, I decided to learn about journalism. It sort-of made sense. I was co-editor of my high school newspaper and I loved writing.

I suppose most people who go off to college to learn how to write wind up studying English, especially English literature. And I took a lot of those sorts of courses as electives as I learned everything I possibly could about mass communication from reporting, radio and television production, public relations and advertising. I wrote a lot of papers, did some performing on camera and on radio, worked as a DJ for a while, and interned as a news reporter and on location camera operator. Some of that was fun. It was certainly a different approach to becoming a creative writer or fiction, though. What benefited me most was spending nearly all my free time working on my first novel. Had I realized at the time how fruitless that effort would become, I might have become discouraged and sought a career in another field – provided it is possible for a writer to choose not to write.

By my senior year at Purdue University, I completed that novel. It will never be published, though. Not because it’s hard to become published. Several of my writing instructors drove that point home with me. But after doing the one thing I writer probably should never do, self-editing a first book, I saw how horribly thin and vain my effort was. What the story lacked was the depth that comes only from experience, along with attention to detail and a decent story arc.

How pretentious of me to think I had anything to say that was worthy of a reader’s attention! Still, the meandering mess went on for several hundred pages and the experience of accomplishing that much writing was significant for my development. Afterward, I knew I could write a book. It no longer seemed quite as improbable that someday I’d be published.

Although I deviated from my main course, looping onto tangents along the way, I always returned to writing. It was my overriding desire. My ex-wife didn’t understand that. How could she? When we met – when we decided to have a life together and bring our children into the world – I was off on a distracting adventure, half a world away from home. Sometimes writers do that, exploring alternative possibilities, in a futile attempt to escape from the voices that compel us to write. At the time what I was doing seemed to make sense. I wanted a family and it is always easy to accept the lure of human feelings. It was normal. And even though I have usually shunned the concept of being normal, it certainly took far less effort than pursuing my writing.

Sometimes those I have been drawn closest to have disappointed me. Other times I have disappointed them. Early on in my marriage I paid lots of attention to my family – to the exclusion of everything else, except for my outside work. As a result, my marriage seemed to work. But then, as I worked more and more hours, I excused my absence from home and my family for making a living and setting aside something for everyone’s future. The lure of money was appealing. It was also more socially acceptable than being holed up in a room hammering out a story. But as writing crept back into the mix of things, as it always will for a writer, I made more and more time for it, carving up my sparse, spare time and I spending less and less time being a husband and father.

There comes a point in every writer’s life when there is a conscious choice between pursuing the dream and surviving the nightmare. The voices, the characters who demand their stories be told, are not easily silenced, though I’m sure many a writer has abused substances in an attempt to escape. I chose to write the stories the voices told me. And so, late into the night I worked on a new novel. My ex wanted more of my time than I could give. But the writer within me that I had suppressed for nearly a decade demanded to be free.

It surprised my ex when she learned what was truly important to me, what lurked in the deepest recesses of my mind. I told her I always wanted to write a great novel. I still do, but I’ve not arrived yet. My ex refused to share that dream with me. She did not appreciate that, for periods, my fictional world was more important to me than the real world to which she belonged. She felt betrayed. But truly, there was nothing I could do other than what I did. If I hadn’t begun writing the books I had within me I’m pretty sure I would have exploded. It’s always that way for a writer and yes, it is messy for those we know well and especially those we love.

Would life have been easier had I always pursued writing? Perhaps. But I grew into who I am today and despite the struggle of the past twenty years I don’t think I would change much of anything if I had it to do over. I love my kids. I don’t know what I would do without them. And I also love the direction this adventure called life had taken me. Everything fits, don’t you see? So, even if I could, I wouldn’t change a thing.