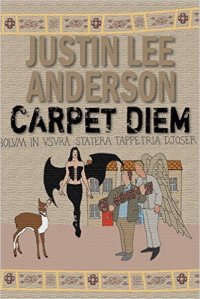 Imagine the big bang was a little mistake that rapidly spun out of control, the result of divine siblings messing around and being unable to stop it. Of course they roll with it, wagering on which species will evolve to dominate. But the game was rigged from the outset so that it isn’t supposed to end in a stalemate.

The title Carpet Diem is a play on the Latin for “Seize the Day”. In this case, Justin Lee Anderson’s novel might be called Carpe Vestis or Seize the Rug. A unique, ancient artifact that Simon Debovar inherits from his uncle, a renowned archeologist, is the source considerable divine interest. You see, what Simon has decided to keep as his living room carpet proves to be the thirteenth and final piece of the ages contest pitting angels against demons. It is all they need to resolve the eternal competition, but according to the Rules, they must have the present owner give it to one or the other sides.

The rug, along with the rest of Simon’s considerable inheritance, came into Simon’s possession thirteen years ago after nearly all of his relations die at a family reunion, the result of an apparent accident involving pudding. As the sole named heir he becomes instantly loaded. And he, an asocial sort retreats even further from society, holed up in an apartment as an antisocial hermit who generally hates people mainly because they smell bad. Simon has disabled his doorbell to prevent anyone from ringing it. But then, after more than a decade of silence, it sounds, waking him from his sleep. He doesn’t answer the door so much from the curiosity of who might be calling but instead to learn how, after all this time, it has managed to ring. Those responsible are an unlikely pair, an angel named Daniel and a demon named Lily who have come bearing propositions. They have long since thrown in together to find the last artifact and are about to make their tempting offers to Simon in exchange. Yes, this is that kind of story, stretching the limits of imagination in the process of advancing plot and having some laughs along the way.

Justin Lee Anderson writes in the tradition of heavyweights like Neil Gaiman, Terry Pratchett and Douglas Adams but with a style all his own. He provides a host of bizarre and seemingly unnavigable situations for his characters, which include just about everything supernatural from witches and wizards to teleporters, ghosts and, of all things, an all-knowing deer. There are even some beings that are undefined in the nature of the universe, with unlimited abilities – just to make things more interesting. With imagination unbridled Anderson writes an absurd adventure leaving the reader wondering where it might go next. And the answer is, just about anywhere.