Most writers have obsessive-compulsive tendencies, I think. Otherwise we’d never labor over a project through all the revisions and edits necessary to bring something to print and share it with the world. Artistic people in general have the same traits. That’s why a lot of us become substance abusers. We don’t know when to stop and likely as not think we can handle whatever it is we are abusing. In my case the substance was alcohol.

I don’t know why or how it started. It was gradual. I liked the way it made me feel, needed the assist to overcome my self-cosciousness. There was a long period of binge drinking throughout college and during the Air Force. Along the way I build up a tolerance. I never got to the point that I worked drunk but there were times I was probably borderline when I went into work. A lot of stuff I wrote was while under the influence. So, much of that stuff I have revised and rewrote since. At the time I wrote them I believed they were pretty good. Being half lit deadens the bane of ever writer, being hypercritical of one’s work.

There were a lot of reasons for my drinking getting out of control, but the blame clearly rests with me. I needed to change otherwise all I was doing was killing myself a drink at a time. I thought about AA and substance abuse counseling. The latter was covered under my health insurance, but I knew that wouldn’t work for me. I was Superman, after all.  could handle anything, just like I always had. I’d broken bad habits in the past – quit smoking for example. It takes self-discipline and a willingness to change lifestyle – dramatically in my case. 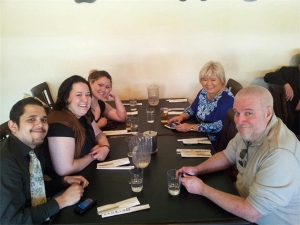 The breaking point came after a trip Illinois to visit my daughters. I took my iPad and a bluetooth keyboard with me to do edits one of the books from he The Wolfcat Chronicles. It seemed like I was always working on one of those ever since I first penned One Pack, the starting point of wiring the ten book series. Writing was my primary focus in life. Since my kids grew up and moved on to pursue their lives, I was alone. My ex-wife and I had separated in practice long before we filed for divorce. After we split being completely on my own was not a good thing for me. I was responsible enough to show up for work on time, but that was about it.

Over a period of three or four years, my drinking increased from one 12 packs a day to one  18 pack. Before I quite I was drinking a case of beer per day. Believing my own bullshit that I was maintaining well enough and not appearing drunk – I was in denial of the problem. I pissed off people,some of them dear friends. Nothing else mattered to me but getting home, sitting down at my computer to write and cracking open a beer – or twelve.

From inside an abuse problem it’s hard to know how one appears to others. There was dependency on alcohol, though. I knew that and work my wasn’t helping it. Health issues were appearing. Overweight and showing signs of retaining water in my ankles, considering my history  with a heart condition, that wasn’t a good thing. I had a number of stress-related problems as well, like lesions that appears on my skin for no apparent reason.

Work paid well enough but, as I was on salary, I was hardly compensated for the amount of time I spent – often more than 16 hours. After my vacation in Illinois with my daughters, I had a change of bosses. Suddenly I was expected to work more hours and asked to come in on my days off without additional compensation or time off on the backside. It was all about getting the job done – whatever it takes! In fact, before I quit on February 22, 2012, I had worked the previous 18 days in a row – pretty much every day since returning from my vacation. On my first real day off in almost three weeks, I received a call from my manager telling me I needed to come in to work yet again – to fix something or the other that the district manager, his boss, wanted done immediately if not yesterday. 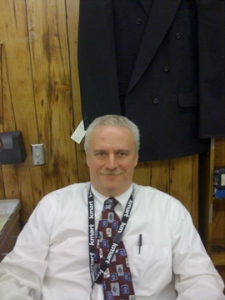 Dutifully I showed up but was dressed down to perform physical labor, as I had done every previous time I had been called in to work on a project, as opposed to covering for someone on the sales floor. My manager sent me home to change into my ‘uniform’ – meaning dress slacks and a dress shirt with my name on a lanyard. This meant he intended form me to work until closing time and help answer manager calls and pages – on my day off. The next day I was scheduled to open the store, meaning I needed to be back to work at 4AM and probably, if the past few weeks were any indication, I wouldn’t get home until around 8PM. It was personally my fault and responsibility to fix anything that was wrong in my part of the store, since the company refused to pay hourly people extra wages to work for me. Being salaried meant the company owned me.

Maybe I snapped. too much drinking over too long a time. I was intoxicated when I went into work. It was my day off, after all. I handed in my keys and immediately I felt better about life.

I’d been considering going pro with my writing for some time. It had been a lifelong ambition. A lot of things got in the way. Even though it wasn’t the best of times for me to quit my job, things had gotten to the point of being insufferable If I didn’t quit then and there I never would and I couldn’t see waking up a year later still putting up with the same crap. Whether from drinking or the job-related stress I was certain I’d die.

It may sound crazy but my initial thought was that all my efforts to write stories that I want dot share with the world would go in vain. I’d die and the world, save for the few dozen of my writer friends who had read the drafts – would never know about the Wolfcats, and my alter ego, Brent Woods and his bizarre universe.

Immediately after quitting I looked for another job. But as that didn’t pan out, mainly what I did every day was was write all day long, uninterrupted. Things began to fall into place, as soon as i quit drinking. It was as if the creative half of my life was coming together from he pieces of my personal life. The draft for Fried Windows I knocked out between March 15 and April 20, 2012 – although at the time I didn’t envision it as a novel but instead a collection of related short stories. A year later I pulled the pieces together and wrote the connective material before adding in an ending.

While I was running out of money and facing eviction I revised a number of my stories and started writing them as well. A routine was established, writing new things in the early morning, taking a break and then revising for several hours before reading or watching movies in the afternoon and evening – just to take my mind off my immediately dire circumstances. I started losing weight because I didn’t have money to buy food and certain couldn’t drink beer. I had to make a choice at times between buying water and buying food while begging for handouts from relatives who, understandably, wondered what I had done with all he money I used to be making. Answer, I drank it.

After eviction I became basically homeless. I depended on relatives to put a roof over my head and give m a place to sleep. I was nomadic until eventually I found a job. I refused to go back to management, though.

Doing what I do for money will never make me a fortune, but I’ve never been about money anyway. No job I’ve ever had paid me what I was worth. I bet it has been the same with you as well. A very wise man once said you’ll never get rich working for someone else.

Anyway, over the past nearly three years, I’ve made a great deal of progress as a writer. Fried Windows was published last May. I’m growing followers on social media and picking up fans for my writing, one reader at a time. The Wolfcat Chronicles is in the works for publication. Keep checking back for news on release dates. In the summer of 2013 I wrote Becoming Thuperman. That will be published sometime in the upcoming months.

Gradually this writing as a career gig is happening. And I’m doing it sober. I’ve lost a lot of weight riding a bicycle to and from work – and pretty much everywhere else I need to go. Yeah, I know it’s a strange life I’m leading but I was born to tell stories. What else would you expect from me? To use an overworked business term, the bottom line is this: I’m doing what I love doing. It’s not like I have a choice about being a writer. It’s in my genes.

1 thought on “Going On a Third Year”