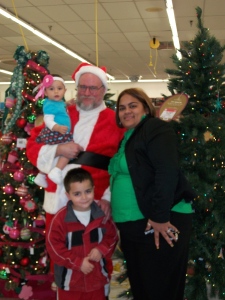 There used to be a saying that I don’t hear anymore: “I’m going to knock the stuffing out of you.” It would have been easily accomplished after Thursday’s Christmas dinner at my sister Joyce’s house. She outdid herself again and I over ate, as usual.

Since my kids grew up and moved away  – and my wife and I divorced – Christmas has been a lot different for me. I’m that uncle, brother, cousin or friend (sort of) – you know the type. Others feel sorry for me on the holiday and invite me over for a meal. But since my kids grew up there hasn’t really been much drive inside of me to celebrate the holiday in a traditional way. Some of that has to do with working in retail for so long that whatever Christmas spirit was in me has long since been wrung out – or would that be rung out, as in Silver Bells? You see – nothing gets you out of the spirit like listening to Christmas music over the store intercom ad nauseum.

I’ve always hated the commercialization of the holiday. Greed has a lot to do with that. It is not the best side of people at all. People take their lives into their hands shopping for the holidays. And it’s kind of like people come out of the woodwork to celebrate, even people who aren’t practicing Christians.

I suppose it’s not really an ‘exclusive club’ sort of holiday, even though a lot has been made of stripping the religious significance from the holiday and getting the reason for the holiday all mixed up in the debate over separation of Church and State. You don’t necessarily have to be a Christian to say Merry Christmas, you know? Since Christmas falls around the time of year when several other holidays occur, like Kwanza, Hanukkah, Yule, the debate over what to say as a holiday greeting has been muddled around and mixed in for good measure. Happy Holidays is less offensive, although back when I was a kid we said that to include New Years along with Christmas.

Historically the early Christian Church moved the celebration of the holiday to coincide with pagan holidays celebrated in Europe for the purpose of recruiting new converts to the religion. A lot of anti-Christian folk point that out as justification for neutering the holiday of its religious overtones. Certainly the truth about when the Birth of Christ actually occurred is a mystery. Many scholars believe it should probably fall around September. And since the calendar in use at the time was Jewish, very likely the holiday would shift around as the lunar and solar calendars do when converting – like with the date for Easter in the Spring, which is tied to the Jewish holiday Passover. So I can see the argument that the actual holiday should not have anything to do with Christian beliefs. However, it has been called Christmas since I was a kid so at least humor an old man and allow me to say Merry Christmas to you without getting your panties in a wad.

The holiday should be celebrated as one sees fit. Not only should it not be forced upon anyone who doesn’t want to celebrate it but also people who do celebrate it should be allowed to practice their religion in the process, if that is their desire. Personally I have never taken any offense when someone wishes me Happy Hanukkah even though I’m not Jewish. And if someone said Happy Kwanza to me, I’d be fine with it although I’m not African. But, then, I have a thicker skin than a lot of people, I guess. To me, it’s not a huge deal what anyone says to me. If you’re more comfortable with Happy Holidays and believe that is the least offensive way of expressing the joy you feel this time of year, go for it.

What i enjoy most about the season is  seeing houses decorated with lights. Some people go Clark Griswold overboard on that, but it’s okay. It’s their power bill, right? But one of the things that irks me about the season is how stressed out it makes some people, like there is an obligation to do this and that. That strips the meaning of the holiday away, making it more about competition (making sure little Johnny and Mary get the best toys) and greed than anything else. One should not feel any obligation to seasonal celebrations, folks. If you aren’t in the mood to sing Christmas Carols, exchange gifts or even make a traditional meal, you shouldn’t have to just for the sake of the holiday and what others would or would not think of you should you abstain. Having said that, I think people like to complain a lot about having to get all the shopping done for everyone, and it really isn’t intended to be a negative thing. It’s almost like some people are driven to see who can finish their shopping for gifts earliest. Me, I was always a last minute kind of guy. Sometimes that worked out with price slashing last minute deep discounts. Occasionally I missed out on getting something that was in short supply, though.

Lately I haven’t been a gift giving type due to my personal economic situation. My family knows about all of that. It’s embarrassing when they get me gifts but I appreciate the sentiment and wanting to help meet out. They know if I could I would share gifts as well and when I get out of my current situation I’ll likely play catch up for a season or two. But that’s the way I’m wired. Money isn’t all that important to me and never has been. The fact that it is important for nearly everyone else sets me at odds with the world at times, but I’m okay fighting that battle. My needs are few: a place to sleep, something to eat, a change of clothes for after a quick shower, and I’m good to go.

I’m grateful for my nephew, Jay, coming over to Orlando to pick me up to take me back to Palm Harbor for Christmas. I’m equally grateful to my brother-in-law, Jerry, for driving me back the day after. Family is important and spending the day with my big sister’s clan was a good time. I spent the past couple of seasons with them, so it’s becoming a tradition, I guess. I think this year we all laughed more than we had in previous gatherings. I’ll take credit for my share of the funny stories, but a lot of that has to do with the shared company and feeling at home, even with that dysfunctional lot.

Anyway, the holiday set me back a couple of days on revising Book Six of The Wolfcat Chronicles, but I had worked that into my personal schedule, so I’m still on track to meet the end of the year deadline. I completed Chapter 16 last night. Today I’m going to attempt knocking out half of the remaining chapters. Perhaps I can finish it off on Tuesday, then, one day earlier than planned. If not, I have Wednesday morning.