Having a weird name like Elgon has been problematic throughout my life. Of course, I never thought it was weird name until I reached school age. Before that, everyone I knew could pronounce my name correctly. They were family, after all. Around the first grade people began to ask me if it was a family name. Uh, my dad had it too but never used it because he didn’t like it much.

I’m not sure why he decided to name me after him, though. People do strange things, don’t they? Especially with the naming of kids, it seem all bets are off. A simple, fairly common name can be spelled a variety of ways in the interest of, well, making it more interesting. What ends up happening from the child’s point of view is that just when you want to blend in and be one of the gang you stand out as the odd ball with that weird name.

When my son reached age ten or so, he realized what a great decision I made on his birth date in not naming him after me. I named him for the first of my ancestors to come to America. His middle name is for the ancestor who signed the Mayflower Compact. Yeah, I have one branch of my family tree going back to Jamestown, Virginia (1607) and the other Plymouth, Massachusetts (1620). Before that my family tree has branches all over the British Isles, it seems, but most of my roots go back to Wales and England.

Anyway, the first time my teacher asked me about the origin of my name I really didn’t have an answer other than to tell her it was what my parents gave me. In retrospect that was an answer as profound as it is superficially stupid. It is a given name, after all. So, of course, my parents gave it to me. Sheesh! But what did I know?

In the interest of enhancing the educational opportunities of us kids, my parents invested a large amount of money purchasing an encyclopedia from some traveling salesman. When I was six years old, mostly, I liked looking at the part of it that had pictures. I was naive enough to believe that all the knowledge in the world was somewhere in those twenty plus volumes. And so I decided to look up my name and find out where it came from, just so I would have a good answer for the next time someone asked, which seemed a nearly daily occurrence once I started school.

To my surprise, my name was actually in there. You see, there is a mountain in Kenya that is my namesake. It is an extinct volcano. How cool was that for a six-year-old to discover? The trouble is, how on Earth did I end up sharing a name with something in Africa when my parents were hillbillies from eastern Kentucky? I figured my dad would know, since he shared the name. But he’d never used the name, preferring to go by Bruce, his assumed middle name – I’ll explain that later.

My paternal grandmother was still alive then and lived not too far from us so the next time I visited her I asked about the origin of the name Elgon. The story she told was about a peddler of pots and pans who came to her place in the hills of Kentucky when she was pregnant with my dad – probably sometime in 1913 or 1914. She thought his name was nice and decided to name Dad that. There, I had my answer, sort of, except as I matured I wondered whatever my grandmother was perhaps as bad at spelling as I was. The way I figure the peddler may have been named Elgin, which is one of the variants of what people assume my name is when I first pronounce it for them. That leads me to a brief discussion of the problem every kid with a strange name has – having to spell it out.

Sometime between the first and fourth grades I grew tired of having to correct people’s mispronouncing my name. So I started saying it and then immediately spelling it out for them. Does it help? Not really. I’ve learned, from my name at least, that people hear whatever they want to hear and largely don’t pay a lot of attention during conversations. Of course they are too busy with their internal monologue and thinking of something to say in response to whatever has been said to them to ever pay too much attention to minor details, like a kid spelling out his odd name.

I guess the name helped to make me weird, or perhaps weirder because I believe I have been the way I am since birth – if not before. So you have a kid born to be the weirdest of weird, a writer, and you give him a weird name. Somehow that seems both appropriate and redundant in retrospect.

I’ve told the story before on this and other blogs about how one of my teachers in high school told me I was mispronouncing my name. Yeah, she actually told me that, as if it were not my name that I could choose to pronounce any way I damned well wanted. That was pretty much my exact response, which, of course, pissed her off enough to dispatch me immediately to the principal’s office. Upon hearing my version of things he tended to agree with me. Afterwards my teacher called me Mr. Williams and even confirmed in advance that she was pronouncing my last name correctly. 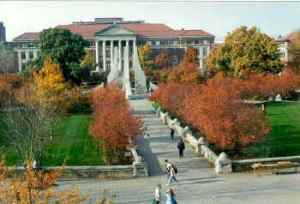 Somewhere along the way, in the spring of 1973, my sister, Genette, who was also stuck with an oddly spelled name, decided I should use my lonely middle initial ‘B’ and fabricated the middle name, Brenton, for me to place on my college application for Purdue University. I also used it when I applied to other universities but that matters little since Purdue is the college I decided to attend. Genette started calling me ‘Brent’ after that, something she still does to this day. And while I was at college I went by Brent.

Even after college, I continued to use Brent as my name. It followed me into the Air Force and halfway around the world to Korea where it was pronounced B-L-E-N-T-A. Oddly enough, I discovered Asians could actually pronounce Elgon correctly. So when I soon tired of being called Blenta, I switched back to being called Elgon and I have used my given name ever since. Brent was relegated to the back of my mind and eventually became the name of a character in one of my books, an alter ego of sorts.

You might ask why, if I am named Elgon, after my dad, am I not Elgon B. Williams Jr? This is maybe the weirdest part of the whole story. You see, my mom knew this kid when she was growing up in the hills and hollers of Kentucky. His name was Junior Williams. I think his given name was actually Junior. People do that to kids, too. Anyway, she hated him because he used to do really disgusting things that involved farts. For example he delighted in cupping his hand to catch a fart and then sticking it under a baby’s nose and laughing while the infant gagged. Mom didn’t want me associated with that sort of person.

So, even after naming me Elgon, which was also my dad’s name, Mom did want Jr. tagged on behind my name. So she didn’t give me Dad’s middle name, which everyone believed was Bruce since he had always been called that. She insisted that the attending nurse not put Jr anywhere on my name since she gave me only the middle initial B. It turned out that when Dad filed for social security benefits and actually received an abstract of birth record from Kentucky that his legal name was Elgon B. Williams, same as mine. Where did the name Bruce come from? No one knows.

I have always signed my name completely as Elgon B. Williams – as if there were any other Elgon Williams with whom I might be confused. It’s silly, I know, but I’m used to doing it and it is automatic when I sign my name.

The reason I bring all this up about my given name is that I’m about to use the novelty of my weird name to advantage. For marketing purposes, my books henceforth will be credited to the author Elgon. It’s not that I’m going to stop using my last name or trying to hide it or anything like that, just that it is, and since my dad passed in 2000, superfluous. I am the only living person – at least to my knowledge – who is named Elgon. There is a mountain in Kenya and a hair care products company in Italy that share my name, but I believe that, without a doubt, I’m certainly the only author named Elgon. There will be no confusion. So when my next book is published sometime early next year it will bear only my first name, Elgon.