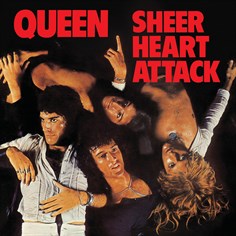 Like a lot of people who grew up in the 70’s and were into Rock Music, Sheer Heart Attack was my introduction to the British group Queen. Released in 1974, the album was the band’s third LP but had the distinction of giving the band its first international hit, Killer Queen, which charted #2 in the UK and #12 in the US.

The foundation for Queen began in 1968 when guitarist Brian May, a student at London’s Imperial College, met Tim Staffell, a bassist and decided to form a band. After placing an ad on the college notice board for a drummer the met Roger Taylor, a dental student. They named their group Smile. While attending Ealing Art College Tim Staffell became friends with Farrokh Balsara who went by the English name Freddie. Balsara became the lead singer and pianist for the group. In 1970 Staffell left the group to join another band. It was at this point that Balsara suggested the band change their name to Queen. Balsara also used his artistic skills to design the trademark Queen logo. Later he changed his surname to Mercury in reference to Mother Mercury from a song lyric in “My Fairy King”.

Although the band was represented by Trident management and was able to use a studio to record demos, the management company had difficulties finding a label willing to sign them, largely due to the connotation of the band’s name Queen. During this time the band went through a number of bassists into 1971 before settling on John Deacon. Trident/EMI recorded their debut, self titled album released in 1973 as well as the follow up Queen II in 1974. Although the debut album produced the fan favorite Keep Yourself Alive and both initial offerings were well received critically well received neither charted well. It wasn’t until he release of 1974’s Sheer Heart Attack that the band began to receive international attention.

In 1975 the band released A Night At The Opera, named for the Marx Brother’s movie. The album included the song Bohemian Rhapsody, a chart topper in the UK and cracked the top ten in the US. The song also holds the distinction of being the only song to ever sell over one million copies in two different periods of release (1975 and 1992). During its second release song charted at #2 based largely on its inclusion in the movie Wayne’s World.

In 1976 Queen’s  followed up to A Night At The Opera was A Day At The Races, another title borrowed from a Marx Brother’s movie. It featured the hit Somebody to Love that charted at #13 in the US and a concert favorite Tie Your Mother Down.

1977’s News Of The World featured We Will Rock You and We Are The Champions that were released as a single in the US reaching #4 on Billboard’s Hot 100.

Queen played to sold out venues in stadiums around the world throughout the late seventies and early eighties, leaving an indelible mark on music history with their innovative sound, song styling and experimentation with overdubbed guitars and layered vocals. The group sold well over an estimated 150 million records and were inducted into the Rock and Roll Hall Of Fame in 2001.