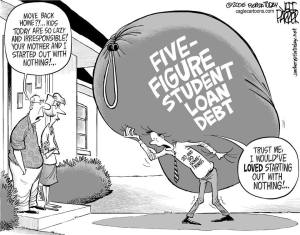 This is a subject that my kids are dealing with directly, the high cost of higher education and the loans they have accumulated in pursuit of their educations. Unfortunately their parents weren’t well healed. We couldn’t pay their ways through college or even supplement their scholarships and student loans. They were fortunate enough to earn scholarships, though, which helped them along the way but, the two oldest amassed a lot of debt pursuing advanced degrees.

The reason higher education is high priced is simple supply and demand. It always has been. If everyone could afford a Master’s degree the value of a Master’s degree would diminish in the economy. The more people who have a certain degree the less valuable it is in distinguishing an individual in a job search and the less an employer is willing to pay for the skill set accorded to that degree – and the more competition for the job.

Currently is is very easy for anyone seeking and associates or bachelors degree to receive financial assistant through government loans for education. That also means that, for the most part, those degrees are about as valuable a high school diploma was thirty years ago. These days a prospective candidate for nearly any entry level position in any company is s expected to have at least some college education.

Since the government made college loans easier to obtain the price of tuitions have skyrocketed. This means the government gives out even more money in loans to students to pay for a bachelors degree that is worth less and less. Even worse, student who focus on degrees that are not in high demand can expect to struggle finding a job, have exorbitant debt and end up working at something just to pay bills and probably nothing related to his or her field of study.

Colleges and universities have become credential factories – at least for bachelor degrees. The educational requirements may not have changed over the years and perhaps have become more stringent in some areas of study but with more people earning degrees the value of the credential has become greatly impacted. At the end of a four year degree program many student find it necessary to pursue advanced degrees to distinguish themselves for the masses of others with bachelors degrees – incurring even more debt. But at least loans for Masters and Doctorate degrees are still subject to credit approval and are, therefore, more restricted and still retain higher value in those fields where there is a strong demand in the economy. However, the competitive forces drive the prices for those degrees as well as the demand for them soars.

And so you end up with a large number of graduates with five and six digit debt going to work at low paying, entry level positions in fields or which why were not directly trained. The employer invests in some job specific training, incurring expense in the process of trying out a new employee. After months or even years of training and development the employee may be promoted into a higher paying position. In the meanwhile the interest on the accumulated debt has accrued and paying off the student loan has become more difficult.

I’m not sure what needs to happen except that, as a general rule, I would prefer the government stay out of the economy as much as possible. The presents of federal money almost always inflates something and causes disruption and distortion. One has only to look at the impact of FEMA money in New Orleans directly after Katrina where demand for even unskilled workers in fast food establishment forced the employers to spend upward of $12 an hour and cut back hours of operations to sunrise to sunset because prospective employees were guaranteed that wage and those hours working clean up jobs. Despite good intentions most government programs wind up accomplishing exactly the opposite of stated goals.

Yes, if a student wants to have a job directly out of college he or she needs to study subjects in college that are in demand in the economy. That has never changed and the presence of government in the system has virtually no effect on such demand for skills. To some extent students who study subjects that are not in high demand must accept that they will probably not find a job in their chosen field and, when a job is found, they may be required to work for less money and spend several years growing within a company. It kind of goes against the concept of pursuing dreams, but reality is like that.

I think the real issue is that lack of quality received in primary an secondary education – the so called free education system. For years students have been graduated without basic skills in reading, writing and math. You might want to debate this with me but, just understand that I have spent over twenty-five years going over job applications to fill entry level retail positions. I have had to screen applicants who had minimal verbal and math skills. I can say that because words were misspelled on applications. The handwriting was awful. And for those positions requiring basis math, the scores were generally low – higher only if allowed the use of a calculator. So it is perfectly normal for employers to seek better educated candidates – those with some college – for jobs paying at or slightly above minimum wage. Again, this is a distortion that is directly attributable to government policies.

We have a Pandora’s Box situation in higher education – now that government has opened the flood gates and colleges and universities have adjusted their budgets around the idea of easy loans for students. It is next to impossible to remove government from the system. Likely as not, in the future a college education will be offered to anyone willing to do the work and be federally subsidized to a large extent. Perhaps, as a model, something along the lines of what Florida provides for 75% and 100% tuition grants in the Bright Futures program that is funded from proceeds of the Lottery. Maybe higher education or technical training will be guaranteed past high school for anyone willing to do the work. Again, I hate to see government enter into anything that is not strictly involved in defense or interstate commerce – as proscribed under the Constitution. But once government is involved in something it is next to impossible to get rid of the interference. Expect degree inflation to continue.