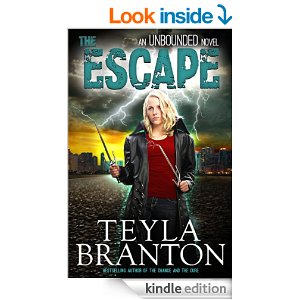 The Escape is the third book of the Unbounded Series by Teyla Branton. If you aren’t familiar with the series, here’s a brief overview.

Erin is Unbounded meaning she is quasi-immortal. Like other Unbounded she was born like every other human but around the time she turned thirty she experienced the Change. The Unbounded have the ability to recover from serious, injuries that to mortals would be fatal. Their bodies are designed to survive and regenerate. This also means that their reproduction is almost a certain consequence of sexual intercourse.

Erin might live for two thousand years unless someone severs the connections between her brain, hearts and reproductive organs. She belongs to a group of other Unbounded called Renegades. A rival group called the Emporium wants to take over the world and subjugate all mortals to servitude and to do so they must overcome resistance of the Renegades either converting them to their cause of eliminated them – usually the latter unless the renegade possesses an ability the Emporium desires for their breeding experiments.

Meanwhile a group of mortals called the Hunters want to get rid of all both groups of Unbounded, Fortunately for the Unbounded the Hunters aren’t all that bright. Still, they are dangerous adversaries.

In The Escape, Erin is learning more and more about her special ability, called sensing. In the previous episode she realized that she could sometimes borrow abilities from other unbounded and she also learned that sometimes she could penetrate the mental defense of others. Here she must use what she has learned about herself in combination with the abilities of others we met in the previous installments. The objective is facilitating the escape of Renegade prisoners from the Emporium strong hold in New York City. In the process of planning Erin discovers the nature of the Emporium’s evil plans to take control of the government through subterfuge and murder.

Although I’m not normally a huge fan of paranormal novels I have seemed o read a number of them in the past year. II enjoy the unleashed imagination that is possible when characters can defy the laws of physics – or rather utilize or explore other, undiscovered levels of the physical universe. It makes for good fantasy, especially if the story is told with enough realism that a reader can easily be drawn into the story.

Branton excels in character development giving us an array of people to care about throughout the telling. This volume has action, mystery, suspense and romance blended together with a healthy dose of political intrigue. I am looking forward to reading The Reckoning, Unbounded Book 4, already available at Amazon.

2 thoughts on “Review of Teyla Branton’s The Escape, Book 3 of The Unbounded Series”