The small town of Buffalo, Wisconsin, population 650-something, is noteworthy for one thing, its Crimson Forest. A major attraction to hunters during the season legend has it that mysterious creatures prowl the forest looking for unsuspecting victims, something supported by random disappearances in the past.

Seventeen-year-old Angelina and her mother own and operate a popular bed and breakfast. When the poor girl was twelve years old her father disappeared in the forest leaving them alone. Five years later, during the fall after her graduation when many of her friends from her graduating class have gone off to college, Angelina remains at home helping her mother prepare for the onslaught of hunters in anticipation of the season.

All Angelina has ever wanted was to be normal but like the forest she has secrets. It’s just that she hasn’t yet realized what they are. But her life is about to change dramatically and the adventure will lead her to rediscover secrets about herself and the mysterious forest. In the process she will learn how far from normal she is.

Some of the memorable characters are endearing while others are despicable, as Christine Gabriel has created a creepy setting for all kinds of unpredictable paranormal activity. She has blended realism with fantasy in a way that makes the outrageous seem plausible, creating a world where magic exists as surely as the strange red colored moss that covers the forest’s floor and clings to the trunks of its trees. The question becomes what sort of mythical creatures don’t inhabit this strange world? Although this is not a book about vampires, there is one named Stephen who offers a bit of comic relief. For example, he gets excited over the mention of a potential blood bath toward the climax of the story and later on Angelina tells him to go stake himself.

Crimson Forest is the first in The Crimson Chronicles series. It is due to launch on August 30, 2014 with the sequel Crimson Moon set to follow sometime in Spring 2015. 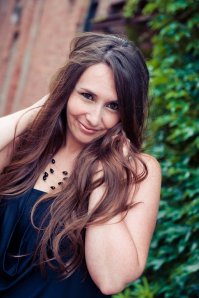