Fried Windows strikes a few chords with a lot of people who read it. What’s interesting is how many different things people take from it. Some have asked me If I planned that, or did I intend for this to be in there. Not wanting to be as evasive as this sounds, the answer is yes and no.

Any author of fiction will tell you about his or her method of writing – where and when they do it, and what the experience is like. For some it is scheduled at a certain time of the day. For others it is more spontaneous and serendipitous Others will tell you about being in The Zone. 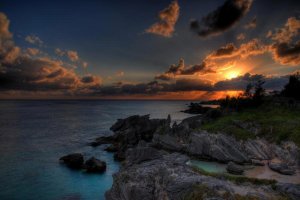 It’s a place that, if you’re lucky, you get to where the words flow well and almost everything you write is pretty darned close to perfect and magical in the first rough draft. No, it doesn’t last for more than a couple of hours or  maybe four. When you emerge from the state you are drained and pretty-much unable to write anything else. But what you’ve written is a keeper.

That’s not to say it might need some revision. It’s not to say that something else might need to connect with it to complete the vision you wish to convey. But you know you won’t discard what you just wrote. It is good enough that even in a raw state you just feel there is something special about it. It shines.

Maybe if you stayed in The Zone all the time you’d burn out or wind up a babbling idiot – not that I’m not getting there for other reasons. I believe writers and other artists can force their minds into an alpha wave state similar to dreaming but do it while conscious and functioning. While there we lose track of everything else and the creative energies of the universe flow through us.

Okay, that’s out there. I’ll grant that. But I know there are some artistic folks reading this nodding their head right now

What separates authors from writers is the ability to find The Zone on a fairly regular basis. For a while, because of a lot of other issues in my daily existence (I won’t call it a life because it certainly didn’t merit being called that) I drank in order to get there. I believe other artists use drugs or alcohol to read a near meditative state of consciousness. Others can find it in different ways. When I wrote Fried Windows, for example, I had quit drinking. In response to a personal challenge I wrote a poem and from that exercise I reconnected wight he feelings and sensations of being a child. Also, I relayed that the child I had been fifty years ago was still there alive and well inside of me.

I’m not saying that a writer can’t produce good stuff worthy of accolades if he or she was not in The one while writing it. It’s just being there kicks things up to another level. When you can  connect with The Zone daily for a period of time what you write has universal appeal. Others will pay attention to it and enjoy in a special way.

I don’t know if being The Zone is a gift or blessing; it just happens. After a while, if you have been practicing putting your feelings into words and expressing everything you sense in as much detail as possible, you make the connection. Reading the words of other authors who are adept at doing what you strive to achieve will help you get there. But at some point you really must shut out the world around you and allow whatever it is that compels you to write, your inspiration, to drive the process.

Being in The Zone is a high and like a drug it gives you an emotional surge and a physical rush. After you’ve been there you can’t wait to get back there. Connecting regularly with your muse or whatever you term what it is that gives you the experience is something you cannot turn away from. I sort of think that inspiration is only a guide, showing you the way that will lead you to The Zone. It takes some effort and concentration to be creative but that lays the foundation for finding you way top the euphoria of achieving art at a higher level of consciousness.

My mind is far from the adventure land that some may believe it is. I will admit to not being normal and even state proudly that I have never wanted tone considered normal. There are a lot of things going on in my head including fears, self-doubt of unrealized potential and misguided ambitions. In everything I have done in life, though, I have attempted to be the best I could b. Writing has been the only thing I have done that allows me to feel accomplishment without questioning why I did it. I answer to no one else when I write. I do it because I must for my survival as a human being.

A while agoI wrote in this blog about not being in competition with other writers. I truly believe that. Every writer had his or her reason for doing what they do. All that matters is that we write better today than we did yesterday or the day before. If we can continually improve we will eventually write something others will want to read. A part of that is finding the path to The Zone. Once there it’s obvious why we do what we do. It’s like everything else in the world shuts down. We float in our imaginations for hours.

There is are not breaks from the moment of being in The Zone. The phone may ring but it goes unanswered and unacknowledged. Cars drive by outside your house or apartment but no one hears. Anyone with the great misfortune to know and live with you will be ignored. While in The Zone hours elapse that seem like they passed in seconds. The duration is evident from the pages generated and the feeling of satisfaction when the words are read even if you wonder where some of them came from.

The Zone is unlimited and not exclusive to those of us who can dream wide awake. It is a level of heightened awareness that transcends being alert. All artists experience it. I’ve known professional musicians who feel it when they have written hit song, for example. When it comes it seems easy and you wonder how you ever missed making the connection before.

When I wrote the core sixteen short stories that followed the first 5000 words of Fried Windows I had those feelings daily for about a month. At times during the revisions, when I was writing connective pieces and additional story elements, I felt it again. It was like I knew the connection was there and what was emerging was magical, beyond anything I had ever written. That’s why I had no doubt the book will be successful. Everyone who reads it shares the magic that somehow passed through me while I was in The Zone for those periods during its composition