I’m a fan. I can’t help it. Lacuna Coil is a great band, tight musically and in concert they are entertaining visually as well. I love Cristina Scabbia’s vocals. Also, it is quite an accomplishment for an Italian band hailing from Milan to make with English lyrics. Both Cristina and her male counterpart, Andrea Ferro, speak English so they sing with distinction not found in phonetic approximation of words.

I discovered LC in early 2006. Karmacode was charting at the time and the song Our Truth was getting some local airplay in anticipation of the band’s appearance at the annual Earthday Birthday festival in Orlando. I took the kids to the concert and we spent the day. The opened with Closer, played Fragile as well as Our Truth and included Enjoy the Silence, which I believe is the best cover of the Depeche Mode song.

Lacuna Coil was, for me, one of the high points of the event that billed such other acts as Rob Zombie, Mudvayne, Shinedown, Trapt, Theory Of A Deadman and Hinder. Lacuna Coil hit the stage in the early afternoon, played a set that was all too brief in my estimation. However it showcased their songs from their the album they were there to promote. 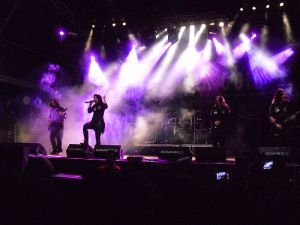 This year, Lacuna Coil was back in the States and they were on the bill for this year’s EDBD show that was held last weekend. Once again, they had an afternoon set. I think that’s indicative of the situation with the band and the often-fickle American music market. Over the nine intervening years not much has changed in terms of the band’s popularity in the mainstream. Maybe that’s not fair to them. I’m glad they aren’t a pop band. They are one of those great live show acts that create fans and generate a following everywhere they go. The fact they haven’t had a viral hit that has propelled them to the forefront in American rock circles has nothing to do with the quality of their work. It’s one of those things. They haven’t clicked in the right way to catch fire. And you know what, there’s more to making music than climbing the charts. Most bands these days are very happy being touring acts and playing their music to crowds. The music industry has evolved in that way. The albums promote the concerts in the exact opposite way that concerts used to promote albums.

Since the release of Karmacode, I’ve dutifully acquired each of LC’s follow-up albums. Although I like each of the albums for different reasons, there has been some experimentation with their sound over the years. The band is more popular closer to home and so there is a definite European characteristic to their sound – which is not a bad thing, just something that American audiences need to warm up to.

Sonically none of the albums since Karmacode had inspired me to wear the songs out. I have included them in playlists in addition to songs from their earlier albums like Comalies and In A Reverie. The band’s later work has turned darker then the production quality has diminished the prominence of the bass line and percussion. Sorry, but I really love bass and percussion. Although the guitar work is excellent I like they way Karmacode was mixed. Maybe that has a lot to do with my feelings about Shallow Life and Dark Adrenaline, which felt overproduced and even slickly done at times. 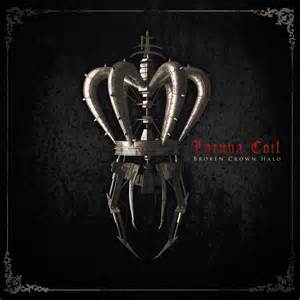 Dark Crown Halo is not the bands best work but it’s solidly performed. There are tracks I particularly like and have added to my playlist: Nothing Stands In My Way, Zombies, Die & Rise, I Forgive (But I won’t Forget Your Name) and One Cold Day. The remainder of the album is listenable as well. Perhaps with repetition some of the songs will grow on me. For me it’s not quite a 4 but certainly not a 3, definitely worth a listen, especially if you’re into the Gothic rock genre.